After months of planning and negotiating, the soil was finally turned as ground broke for the construction of a modern, state of the art facility which will become the new home for the residents at the Care Project.

Dozens were in attendance to witness the momentous occasion which took place near the current home of the Care Project, which is located at the old Holberton Hospital in the building which once housed the Children’s Ward.

Moments before he and three others turned the soil with their golden shovels, Health and Environment Minister Molwyn Joseph disclosed that great things can happen when people of good and noble character come together for the benefit of humanity.

“I am pleased today and I should say this, government alone cannot do it, and this is the story this afternoon; it’s because of the collaboration between the government, the Maria Holder Memorial Trust and the Jumby Bay residents that we are able to stand here this afternoon to break ground. And when I speak about breaking ground I am not only speaking about turning the soil, I am speaking about the collaboration that has been established to make this a possibility today and I trust it will be an example throughout Antigua and Barbuda,” said Joseph 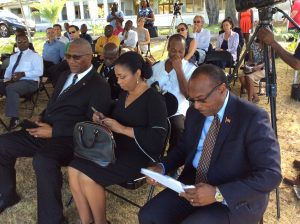 His Excellency, Governor General of Antigua and Barbuda, Sir Rodney Williams was also in attendance and the Head of State not only commended the staff at the Care Project but he also expressed his profound pleasure with all the good news he has been hearing about the institution.

“Lady Williams and I take pleasure in reading the monthly reports which continue to reflect the positive improvements in each child. Not only do we get the reports but from time to time, Annette herself comes to the office to hear any new thoughts that we may have from the reports that we get. So this afternoon I want to commend Annette and her team and Lady Williams for embracing persons with disabilities and doing their best
to meet their needs,” declared Sir Rodney.

Another speaker at the function was the Chairperson of the “Friends of the Care Project Group”, Annette Carey, who told the gathering that the idea for the project started three years ago after a decision was taken to build a complete new structure rather than repairing the old building.

“Our journey started a little over three years ago when I was introduced to Mark Reid of the Jumby Bay Fund, Michael Russell and Donna Clarke from the Maria Holder Memorial Trust to discuss how we could obtain funding and move forward with this project. Originally we were going to repair the current building which had a leaking roof and bathroom that was in urgent need of upgrading. But we came to the decision that the building was not fit for purpose and that a new building should be built,” Carey revealed.

The day to day operations at the Care Project is supervised by Matron Juliet De La Bastide, who was overjoyed to finally see the dream becoming a reality.

“In honesty, I really feel overjoyed to see the reality of this happening, you know most times you hear promises and charity agencies and governments make promises that never come to fruition and as far as I am concerned the dream is coming through and we are elated and excited. Myself, the staff, the management, the residents and clients, they are all bubbling. So this is a dream come true. At present, there are twenty-five clients at the Care Project, eleven who are full-time residents and 14 individuals who use the facility on a daily basis.

Overall, the new center will be constructed in partnership between the Jumby Bay Fund, the Maria Holder Memorial Trust and the Government of the twin Island State. The facility is expected to be completed by May or June next year.

One million United States dollars have been allocated to the construction phase of the project while one hundred and fifty thousand US has been set aside for furnishings, equipment, fixtures and other miscellaneous items.
Jumby Bay is contributing just over three hundred thousand US Dollars while the Maria Holder Memorial Trust is donating the balance. The Government facilitated the use of the land. 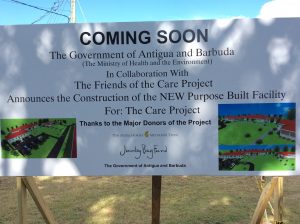